Hi all, I’ve spent a bit of time this year working on a commercial Ableton Live pack, being released by Loopmasters, in conjunction with School of Synthesis.

It’s a pretty sweet sounding collection of loops, but is also way more than that, as they have all been re-imagined into Ableton Instrument racks, allowing for realtime manipulation, re-sequencing and performance via from Ableton Push, or any other MIDI Controller.

Check out Analogue Sequences – School of Synthesis pack at Loopmasters.

I recently came across a Roland D-20 Synth that was in pretty bad shape. It worked for a few hours, but then was giving constant “Main Board Errors”

But this was the beautiful part! Every time the synth was turned off and on, it started to play the most amazing glitches out industrial type synth tones.

These instruments are made from half an hour of recordings of me turning the synth off and on again to get weird and wonderful tones.

Download 9 Instrument racks here. All will work with Live 9.5 standard and above.

If you use them, or find the racks inspiring to make your own instruments, consider donating a dollar.

I spent some time recently sampling the amazing PPG Wave 2.3 at the wonderful MESS Foundation. It is a fantastic organisation with an extensive Vintage Synth collection, and very reasonable subscription rates which allows you to access some amazing pieces of Electronic Music’s history.

The PPG Wave 2.3, is a visually striking and aurally exciting early digital/wavetable synthesiser from the early 1980s. It’s not a particularly intuitive instrument, but has a certain kind of beauty in its glitches and a very musical randomness in its timbre.

After 4 hours recording time, I felt that I only started to scratch the surface of it, but from some of these recordings I have created these 3 multi-sample sampler instruments for Ableton Live 9.2, available as a Live Pack that you can download for free.

If you like these Ableton racks, please consider donating a dollar! 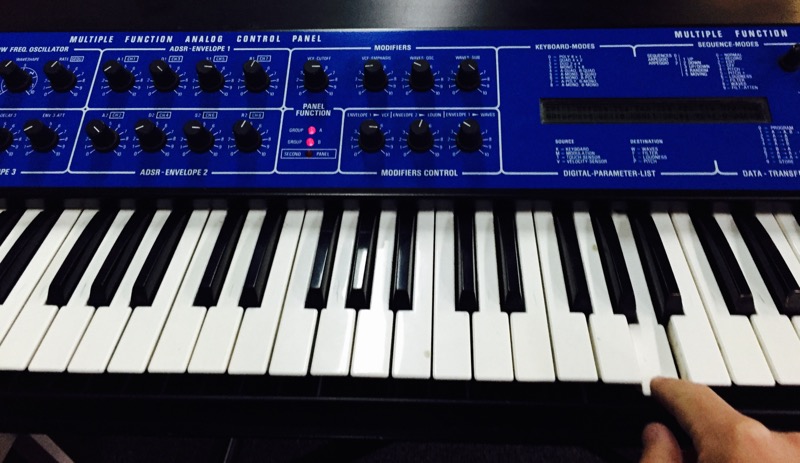 For someone who is fairly new to this composition for games industry, it was a pretty exciting night to be part of, and pretty amazing that my score and sound design won.

So, congratulations to all the crew at Many Monkeys for making such a great minimalistic, Zen-inspired game, and I feel honoured to be recognised by the Australian Game Developer’s Industry for my part in this project.

I also did an interview about the process of creating the Soundtrack for Ableton.com, which you can read here.

Download Breath of Light via the iTunes store or Google play, and you can get the “award-winning” 😉 soundtrack for free via Bandcamp.

If you’ve downloaded my “Vocoder for Push” racks, then you should understand the concept behind these racks… basically they’re performance orientated racked instruments that hack the external instrument and external effect devices to be able to pre-map the audio routings. By default audio input 1 is used as the mic source, but you can change this if you want.

In this Live set there are two instrument racks, one for Errorsmith’s “Razor”, and the other for Tim Exile’s “The Mouth”. Both devices require a license and the Reaktor 5 Player available via nativeinstruments.com.

This is my (nearly) 3 year old daughter singing through The Mouth – “Autoharmonious” Rack.

Download the LivePack file that has these Instrument/FX racks HERE.

If you like these Ableton racks, please consider donating a dollar!

I’m giving away five instrument racks based on sounds off my new EP Tiny tidal waves.

Rather than providing instruments that would just play the sounds from the EP, I thought it’d be much more interesting to create a new instrument from each track.

What you get is a collection of instrument racks created from the key elements of each track, re-contextualised into new Ableton instruments. The intention is that they will be useful in a variety of contexts, whilst retaining the flavour of my immersive, shoe-gaze, soundscape vibe.

If you dig deep into the racks, hopefully you’ll find some techniques that will inspire you in the creation of your own instrument racks.

If you like what you hear, consider downloading the EP for AU$3 via Bandcamp.

Hi everyone, you can now buy Tiny tidal waves for $3 via bandcamp. It’s a 5 track EP, that I initially wrote a blog post about here. The photography for the album cover and press shots were done by the wonderful Penny Lane. And the cover shot was taken in front of the rather spectacular artwork of Ash Keating.

Over the last few months, I’ve been composing and creating sound for a really beautiful meditative puzzle game for iOS called Breath of Light.

Made by Melbourne game development company Many Monkeys, Breath of Light is the sort of puzzle game that takes time to master, there is no rushing the process, It’s a slow paced game that required immersive, meditative music.

The interface is a bit like a Zen Garden, where the player must arrange and move objects within the space to allow the flow of energy from one lotus flower to another. The game is set over 4 seasons, Summer, Autumn, Winter and Spring, each progressively more challenging as the levels evolve.

Each season has it’s own musical underscore created from a bank of loops that are designed to both work in any combination, but also evolve and develop over time with the gameplay.

It was decided very early on that User Interface (U.I.) sounds should add to the musical score. The way we made this work was to have a series of randomised tones associated with every object and movement within the game. All these sounds were composed in a way that to match the tonality of each season’s underscore, which allows every gesture within the game-play to contribute to an interactive soundtrack.

During the development of the soundtrack, I used Ableton Live to create a performable set to play these sounds to both demo these musical ideas to the guys at Many Monkeys and to test how the U.I. sounds blended with each other. I did this by creating drum racks that housed the U.I sounds and used scenes to work out the different combinations of underscore loops for each level in the game.

Once the nuts and bolts of the game sound was finalised, I set about developing a performable live set to recorded each ‘season’ as a musical composition in it’s own right. This was done with a little extra help from the wonderful Max for Live Dub Machines audio FX ‘Magnetic‘ and ‘Diffuse‘ which added extra flow and movement.

Below are the recorded seasons of the Breath of Light soundtrack, available for free download via Bandcamp.

Setting up the Vocoder to work ‘out of the box’ with Ableton’s Push controller was a challenge that I set myself.

For anyone who has used the Vocoder in Live 9 before, you should know that you by default, need two channels, one Midi and one Audio, and they need to have channel routings set up in a particular fashion to make them work.

This doesn’t work so well when you want to load a ready to go Vocoder directly from Push. So, I worked out a way to use Live’s External FX device within an Instrument rack to allow audio to be sent into a Midi channel.

You can download the live set for free here, and watch the youtube video below for more information on how to ensure it works correctly for your needs.

If you like this Instrument rack, please consider donating a dollar!

The QUADwrangle interactive sound sculpture project at Arts Centre Melbourne is all done and dusted (for now!)

Arts Centre Melbourne’s youth programmer Dan West arranged for this video to be made, which sum up the project’s aims and intentions pretty well.

During the second weekend session we battled a bit to get our awesome sculptural object to wired up to the two MaKeyMaKey Arduino boards. But once it was finally working, and in the Fairfax Theatre foyer space , it sprung to life and happily interacted with the general public  for five days straight!

There were four stations where people could play the sculpture, each with a sound set that corresponded to the object’s design. The fence section played bass notes, the brick section played harmony, the tiles played melody, and the diamond wall section played rhythms. 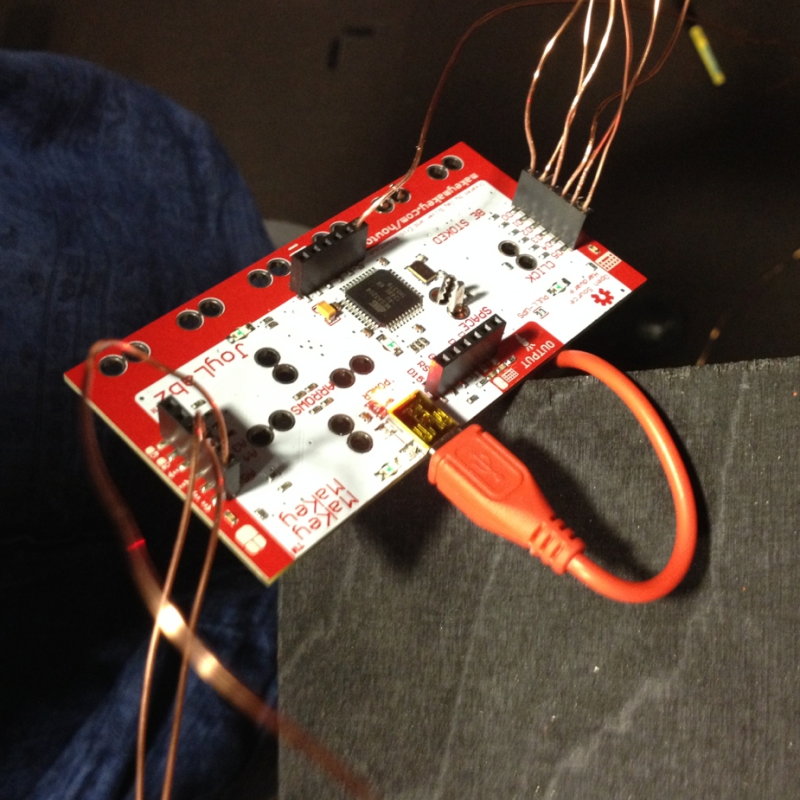 Have a look at Flick, Ayten and Kelsey demoing it during the construction phase.

Each QWERTY key command was assigned to various ‘gestures’ within Ableton Live 9. I say gestures, because each key command triggered a number of different actions simultaneously such as triggering an audio or midi clip at the same time as triggering FX chains and movement between the four speakers.

One example of how this triggering of gestures worked is the letter “R” (see screen grab below). When the point on the sculpture triggered Capital R, this then triggered the key command gestures that were assigned in Live 9.

“R” was set up to trigger a simple melodic riff, but if held down for long enough also triggered a ‘resonation FX chain’ that would gradually fade in to make the whole object become awash with a harmonically rich reverb sound. This was accomplished by the triggering of “dummy clips” on the Output channels, which have no audio information, but instead hold automation data. These clips were set up Gate mode, so they would only play when held down. 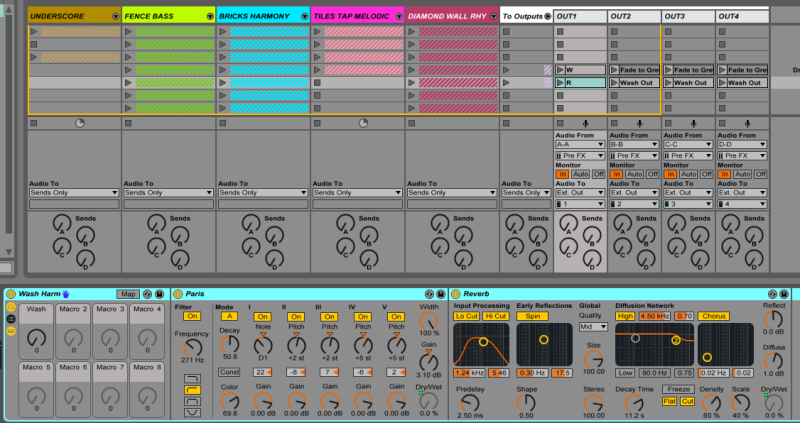 These channels received audio from each of the four sound sources through their respective sends. In this way, at any time we could route any of the different sounds within the sculpture to any or all of the four speakers in any combination.

Below is the Fence Bass being routed to sends B & D, which in turn were being sent to outs 2 and 4, the speakers located near the ground.

We also had a series of field records that acted as an underscore for the sculpture, so that the object wasn’t silently sitting there when people were not interacting with it.

This underscore slowly moved around each of the four speakers through send level automation, once again created within a dummy clip.

This project was really super fun, and great to work with the wonderful staff at Arts Centre Melbourne, and the talented and creative young people who recorded the sounds, designed the sculpture and wired it all up to work!

Check out their various soundcloud and web links: