Hi all…So this is all about Montreal…

So, firstly we had an absolutely crazy NYC cab driver driving us to the airport. nutbag. every opportunity he had to accelerate, he did. even if it meant breaking a second and a half later… every car/truck/bike he could overtake, he did…. every lane change he thought may give him a slight advantage in the traffic… he took it…. i hate drivers like that. Jordy almost chucked her guts when we stopped at the airport.

anyway… onto more fun, non-vomit associated stories… we caught the flight to Montreal with music legend Patty Smith… we were in the rather long customs line, walking back and forth, and at every halfway point, i would say… ‘gee…  that woman looks really familiar’… and then it dawned upon me who it was… anyway.. that was quite exciting.

and whilst we’re on celebrity spottings, i should also tell you that we saw Alec Baldwin in the Apple Store in Soho, Mike Meyers (party on Wayne!…party on Garth!) on the corner of Broadway and Greene st, and Aussie film star Heath Ledger on Broadway and Prince. They are also filming a TV show out the front of our apartment which stars Ted Danson… we havn’t seen him yet though.

anyway… back to Montreal… so, we stayed at a quaint little B&B type place called “VIP Loft Suites”… anyway… we weren’t quite in a Loft… more like a Basement… but it was nice… in that we had separate rooms, and comfy double beds. nice. The manager was a rather enthusiastic guy called ‘Jeremy’ who proudly announced in his rather odd French/Canadian accent that it was his 2nd day on the job… i can’t really explain how strange his accent was… but the way he said Jer-i-mei was pretty amusing to me.

The main reason why we went to Montreal was for the “POP Montreal!” festival, and whilst we didn’t know heaps of the acts, we kinda knew what we wanted to see, so after a bit of perusing the festival guide, we dragged ourselves out to a couple of AMAZING shows.

On Wednesday we saw a band called Caribou, who is a guy from Canada who used to make music under the name of Manitoba, but had to change his name because of some silly legal reasons… the new name apparently came to him whilst in the Canadian wilderness whilst on Acid! funny. and perhaps a little bit indicative of the type of music he and his band made. A weird hybrid of electronica and noisy indie stuff drenched in that new psychedelia thing… lots of awesome visuals… all based on textures, rather than images… which made it more of a light-show effect than a film-watching experience, and a band that was totally tight, and amazing. Two drummers at certain points in the set made for some absolutely amazing moments. so cool.

Thursday night was Toronto record label’s Arts and Crafts night, with the highlight being the amazing round windows in the venue. The bands were ok… not great.. .not the cream of the arts and crafts label… anyway… we plucked up enough courage to give a copy of our demo to who we think was the label manager…. so we’ll see what eventuates from that.

Friday night was Grizzly Bear , which to be honest, i didn’t really know much about, other than they were kinda folk/experimental, which kinda sounds like a bizarre combo…  but wow. what a totally amazing band. and such an ace theatre space. The bass player had a vast array of FX pedals… like more than i could ever have dreamed of pluggin in together… loads of loopers/tremelo/delays/reverbs./switchers/octavesfuzzes… beforehand i was saying to Jordy “What the hell? what’s he gonna do with all of them??!” but after seeing him create these amazing sonic textures with a clarinet through an octave/fuzz/delay pedal… wow… it was totally incredible, and tasteful, and inspiring.

Saturday night we stayed up late to go to Reykjavik! a crazy (and i mean crazzzy!) punk band from Iceland…. totally worth it… they were incredible, and energizing.. which was much needed after the 1.20am starting time.

Sunday night we went to Hot Hot Heat… a band that are signed to a major… kinda cheezy, but really good light show… very “slick”… a bit too slick for my liking… no edge like Reykjavik!

anyway… enough about the bands already!! but there was more to Montreal than that!… like great food, lots of french menus, and heaps of great antique/vintage/retro “fripperies” or second hand stores. cool stuff.

also i have to mention the absolutely ridiculous lack of health and safety laws! ohh my god… Australian Unions would have a field day, and would shut the whole city down. Possibly the craziest thing i saw was a guy 2 stories up, on a plank of wood balanced over two different properties balconies fixing the slate on the top of the roofs without a safety harness. insanity.

Montreal is a very pretty city though.. especially out of of the way of the main streets. Rue St. Denis is nice with lots of French cafes with good food and MASSIVE hot chocolates… (see below), and also some cool shops… but Rue St. Catherine just has lots of druggie kids and homeless people asking you for money. Boo.

There was also a surprising amount of Punk Rockers around where we were staying… as well as the crazy amount of punk rock shops… one little 2 dollar shop type place had a whole range of “emo” add on…..wrist bands/shoe laces/belts/hairbands etc…some of the SRCSers would have a field day with it!

anyway… here are some pics of our time in Montreal. In summary… nice place. french people are ok. the festival was a bit disorganized. they have good vintage clothing…. sorry i’ve realized this email is all quite random… i’m writing it sitting in our new new york apartment after not much sleep, party because of the concrete slab of a bed i’ve been sleeping on, and partly because of the guy downstairs who insists on starting his bass guitar practice between 1.30am and 2.30am each night…. but more on that soon! 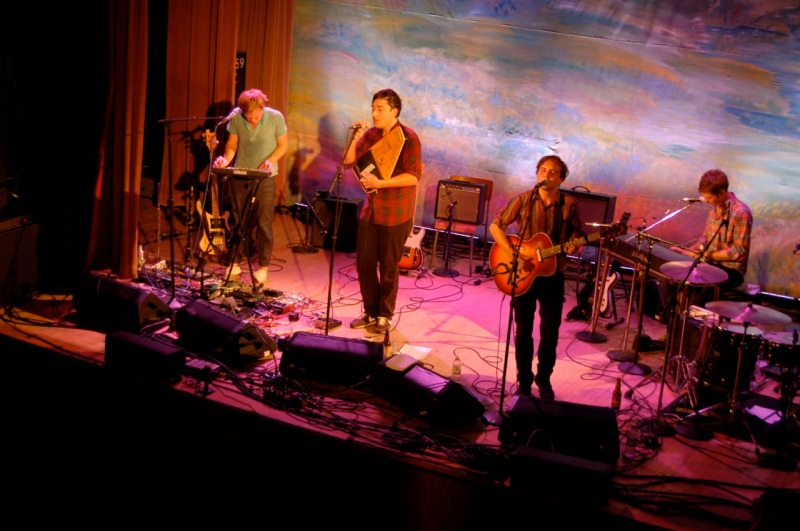