So, i can’t really start the next chapter of this tale without telling you of the crazy time we had getting from NYC to Reykjavik… with a short little 20 hour stop-over in London town…!! it goes something like this… fly 6 hours… get on tube… get on another tube… get on a bus… crash at Chris’s…. wake up… buy beer and chips… go to a surprise party…. eat pizza….get on a bus… pack again…. sleep…. wake up… get on a bus… get on a train… get on a plane… get on a bus…get in a cab…. crash on Buzby’s couch… go to Airwaves festival!

Crazy i tell ya. but fun none the less!… well actually transit is not so fun.. but the festival has been fun.

Probably the best thing about it compared to Pop Montreal, is that all the venues are much closer together…. and we have been staying right in the middle of it all.

Buzby is a electronic musician who i have only really conversed with over the internet until meeting him on Wednesday, and he has very generously offered space up his apartment for both Jordy and I for our stay in Reykjavik… which is pretty bloody awesome considering the cost of accommodation, food, alcohol, and everything except for heating bills here.

It’s right on Laugavegar… which for anyone who has visited Reykjavik will know, is the main street…. for those who don’t know the city… Central Reykjavik (101/Old Town) is like the size of Brunswick St. in Fitzroy… and his place is as if we were living above the Evelyn…. so yes… pretty central to things.

anyway… it’s pretty cold here. it was -3 degrees when we arrived.. but fine… and since then as gotten wetter, but a bit warmer… maybe like 6-10 degrees?

but that said it hasn’t really affected our experience to much, because the apartment is always warm thanks to the wonders of geo-thermal heating, and also, we’ve been in sweaty rock venues all week!

and then there was the wonderful rather amazing Trentemøller… (Karl, i was thinking of you throughout the set!)

and also some bloody ace new bands one called “the Ghost”   http://www.myspace.com/theghostband1

who are from the Faroe Islands, (if you’re on myspace… add them as a friend) and a Reykjavik band called FM Belfast, who i’m sure will be absolutely huge…. and we had the pleasure of playing with both of them at a funky little clothing shop called “Naked Ape”… at one of the “Off-Venue” events that we played at. These Off-Venue shows are pretty much parties that the shop owners put on… with free beer/gin and tonics/soft drink for anyone who attends…. they happen in the late arvo/early evening before the main venues open up… a great idea, and heaps of locals came along, as they are open to all, not just festival pass holders.

Saturday night, we caught Annuals… well actually I caught Annuals, whilst Jordy was learning the icelandic phrase for “What’s going on” by some rather enthusiastic young icelanders… and then the first half of Block Party… who were ok… but not really raising the roof…

.. but the roof was raised by FM Belfast at a late show… and then it nearly came crashing down on us, as the guitarist from Reykjavik! (the band that is-see earlier Montreal email about them) monkey swung along the hanging pipes along the roof during their electro cover version of “Killing in the name of”

which you can’t hear here…  http://www.myspace.com/fmbelfast  but you should check them out anyway.

After seeing him swing from the rafters… we went and introduced ourselves, and between kissing Jordy squarley on the lips and saying to her “Let’s not get too crazy baby” and he and the other Reykjavik! guys thanking me profusely for seeing them at Pop Montreal he gave me a card and told me to call him in the morning… his card tells us that he is actually the PR guy for Mr. Destiny, who ran the festival. random.

so anyway, i did call him, and we ended up getting a free dinner with him, and a couple of Poets who were in town the week earlier for a poetry festival…. and what’s possibly even funnier is that he didn’t actually remember meeting us the night before! but was all quite cool about it, and told us stories of his days as a fish gutter, and which fish smelt worse on the inside, and also proudly showed off his R! tattoo that he got whilst in Montreal.

ohh, a bit out of order here… but Jordy and I went to the Blue Lagoon Airwaves Party on Saturday afternoon before our show.. which was kinda just like going to the Blue Lagoon, but with a couple of people DJing and a bunch of drunk tourists thinking it was Ibiza, jumping around in the water.

funny. but we did cover ourselves in the ‘cleansing’ mud, and felt quite good about it all… until i put my hand in some mud in one of the warmer patches of the lagoon only to find it not as ‘cleansing’… but instead full of hair… i tried not to think about it too much after that, but i did keep my mouth a bit more closed.

and yes…the shows we played went down a treat, with a bunch of people picking up the free cds we left out… i think we probably got rid of maybe 40? not sure on exact numbers… but Eythor (Buzby’s housemate, and our default sound guy) was saying that people were saying good things about us in Icelandic. The Naked Ape one was a bit more happening that the one in Kormáks & Skjalda (the men’s suit store)… but both had a really good vibe about them.

ok… so onto the week ahead, and we’re getting up early to have a day of driving northwards to the Snaefellsnes Peninsula…. yes, hiring a car for the day.. driving on the opposite side of the road for the first time… should be interesting i reckon…we’re charging our camera batteries!

ohh, and speaking of cameras!! i can’t finish this email without telling you of the ridiculous amount of press and photographers at Airwaves festival… it seemed that every 3rd person had a press pass, and at every single show there was a paparazzi style shoot-a-thon… even for support acts…. and even at the ‘off-venue’ places! i think we got snapped a couple of times!.. but we havn’t seen our pics in the paper yet. 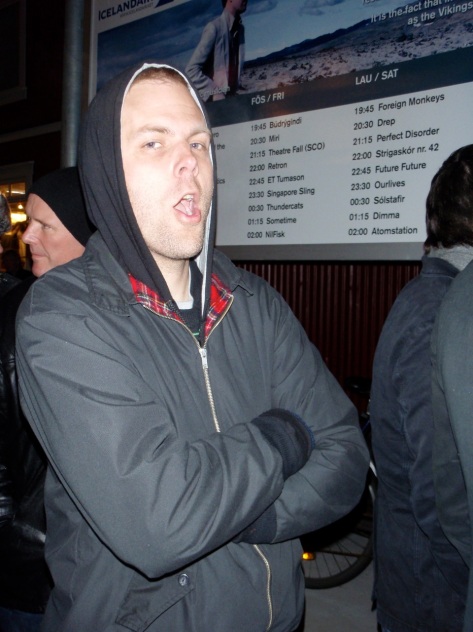 It was my first time driving on the right, sorry wrong side of the road… and it took a little getting used to… the round-abouts were initially a challenge, as trying to work out where you’re meant to look for on-coming traffic is a little strange. But the only other thing that kinda threw me was continually going for the gear stick with my left hand, and only reaching the window handle instead!

Once we found our way out of Reykjavik it was surprisingly easy to drive around, as there was very little traffic… but the other challenge was just to keep my eyes on the road, and off the spectacular scenery!

I’m not exactly sure if i can properly do it justice with words (of with photographs for that matter!)… but to put it in an Australian context, imagine the view of the great ocean road on one side of the road, and then the Grampians on the other side of the road, and then whenever you go over a hill, the scenery changes dramatically, and suddenly turns into a moss covered lava field, then a glacier! Every twist and turn something new and amazing was around the corner.

We did a little bit of off-road driving, but not intentionally, as roads would suddenly turn into gravel, and often with loads of bumps and holes.

But Jordy and I were stopping at almost every twist and turn, to jump out of the car, frantically snap as many pictures as we could before our fingers and faces became numb, and then would jump back in the car again.

The drive home was equally amazing, but probably a little bit scarier, as it was dark, and the rain was coming in sideways directly onto the windscreen…. the lack of street lights also made it a little crazy, but luckily i found a truck to drive behind for the last 45 minutes coming into Reykjavik… which made it a lot easier to feel drive in the dark on the wrong side of the road.

The rest of the week in Reykjavik involved sleeping in, catching a couple of hours of daylight, finding the cheapest food in town, hanging out with Buzby and Eyþór, playing “Halo 3” on X-Box… (which i’ve never done before… pretty much a shoot-em-up game… that Buzby insisted i stay playing until 4.30am!) I have to admit, it is quite addictive… but  my dreams were a bit crazy that night.

We also got into the Icelandic way, and would go out every night… but only after midnight…. till about 2.30 am each night midweek… which seems crazy, considering that a pint of beer costs 600 icelandic Krona… which equals something like AU$12… so you can begin to understand why everyone wants to start drinking late.

By Saturday we were ready for something new, and thankfully Buzby and Eyþór transformed their house into a Dancefloor for a party…. It was a good party, which went till about 1.30am, when everyone left (including the hosts) to go out onto the main drag and to “Runter”… which basically means bar-hopping… we ended up in Sirkus where Icelandic Celebrities hang out, with a few locals we had met along the way, and stayed until close there… which you would normally think would be when there were only a couple of the stragglers hanging on… but in Reykjavik, means the whole bar still sardine-style packed with the lights on, music off, and people still wanting more.

anyway… needless to say, Sunday was a bit of a write-off, and by Monday morning, at 8am, we were walking through the newly formed snow to the bus-stop, and then, sitting on the airport, marvelling at how the rather drab-temporary looking grey concrete houses that looked so ugly and un-inspired on the way in, somehow looked so much more in place, and kinda beautiful in a landscape covered in snow. 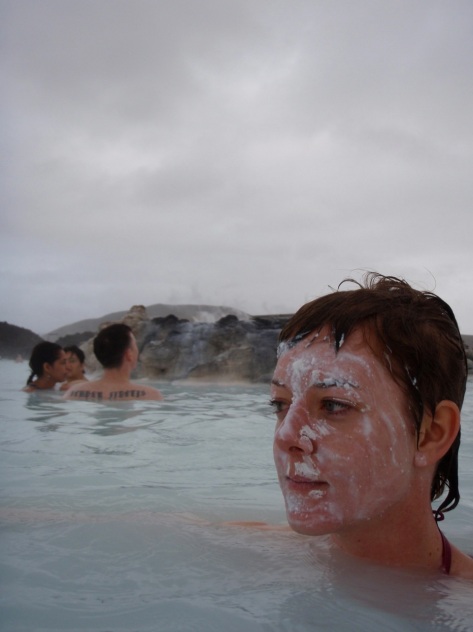