Over the last few months, I’ve been composing and creating sound for a really beautiful meditative puzzle game for iOS called Breath of Light.

Made by Melbourne game development company Many Monkeys, Breath of Light is the sort of puzzle game that takes time to master, there is no rushing the process, It’s a slow paced game that required immersive, meditative music.

The interface is a bit like a Zen Garden, where the player must arrange and move objects within the space to allow the flow of energy from one lotus flower to another. The game is set over 4 seasons, Summer, Autumn, Winter and Spring, each progressively more challenging as the levels evolve.

Each season has it’s own musical underscore created from a bank of loops that are designed to both work in any combination, but also evolve and develop over time with the gameplay.

It was decided very early on that User Interface (U.I.) sounds should add to the musical score. The way we made this work was to have a series of randomised tones associated with every object and movement within the game. All these sounds were composed in a way that to match the tonality of each season’s underscore, which allows every gesture within the game-play to contribute to an interactive soundtrack.

During the development of the soundtrack, I used Ableton Live to create a performable set to play these sounds to both demo these musical ideas to the guys at Many Monkeys and to test how the U.I. sounds blended with each other. I did this by creating drum racks that housed the U.I sounds and used scenes to work out the different combinations of underscore loops for each level in the game. 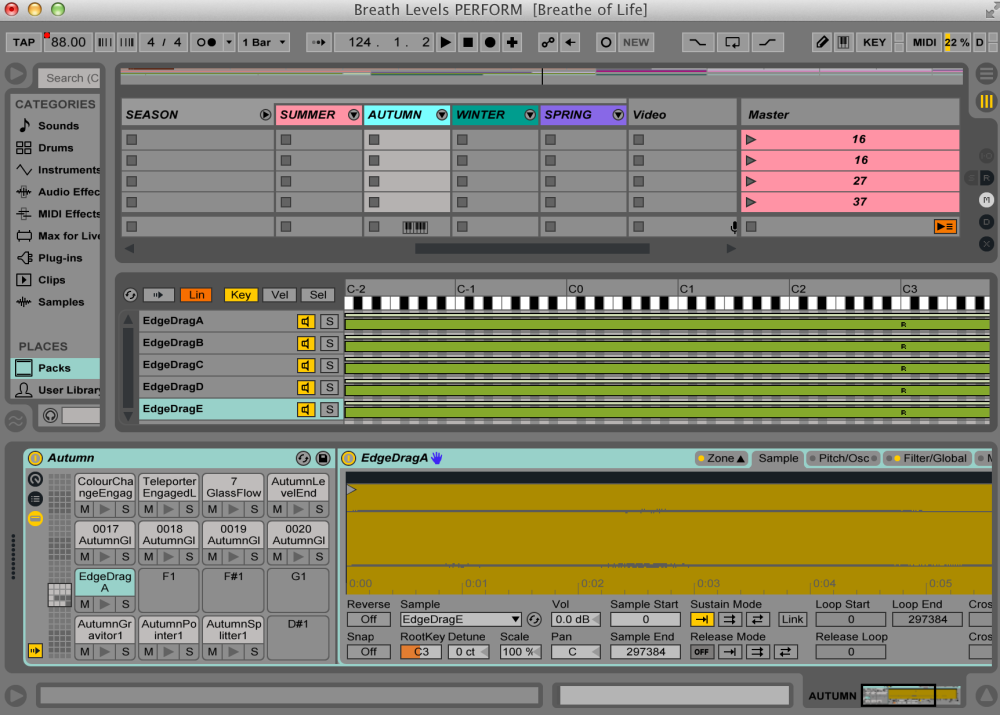 Once the nuts and bolts of the game sound was finalised, I set about developing a performable live set to recorded each ‘season’ as a musical composition in it’s own right. This was done with a little extra help from the wonderful Max for Live Dub Machines audio FX ‘Magnetic‘ and ‘Diffuse‘ which added extra flow and movement.

Below are the recorded seasons of the Breath of Light soundtrack, available for free download via Bandcamp.